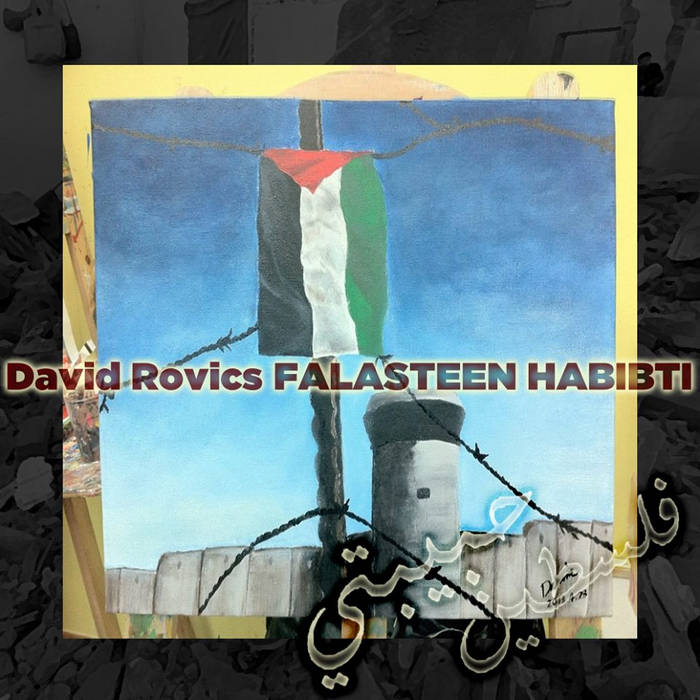 mctiddies From the river to the sea, Palestine will be free!

This is a compilation album of songs about Palestine.

What you've got here are 19 songs and 2 poems that represent everything I'd care to mention that I've written (aside from essays) on the broad subject of Palestine. I've arranged the songs from track 1 to 21 in such a way that I think they flow well musically as well as thematically.

Track 1, “Gaza,” was written during the massive Israeli bombardment of July, 2014. But it's actually a song about how daily life was for Palestinians in Gaza in the decade or so preceding that.

Track 2, “Occupation,” is about the central contradiction of the whole Israel-Palestine question. It is not a religious conflict, nor is it mainly a problem having to do with communication between peoples. It is an occupation of one people and their land by another people, overwhelmingly foreigners from Europe and North America.

Track 3, “Israeli Geography 101,” refers to one of the many elephants in the living room when it comes to Israel/Palestine. Israeli leaders are constantly bemoaning the idea that Hamas refuses to acknowledge Israel's “right to exist.” But neither they nor the western media will explain that one of the reasons Hamas and others are reticent about this “acknowledgement” is that the government of Israel refuses to acknowledge where its own national borders begin and end.

Track 4, “Bubbling Up,” is about Scarlet Johansson taking on the role of spokeswoman for the Sodastream Corporation, whose main manufacturing facility is on an illegal West Bank settlement.

Track 5, “What Do You Call It,” makes the very important (and very controversial) comparison between Nazi Germany and the Israeli regime. It is impossible for anyone with a knowledge of twentieth-century history not to make this comparison. It is a nation of holocaust survivors that have displaced and are imposing daily collective punishment on another people, including doing things like bombing a walled-in ghetto that they have created.

Track 6, “Holy Land Five,” is about the trials and ultimate conviction of the founders of the Holy Land Foundation. They were sentenced to between 15 and 65 years for the crime of sending food and medicine to Palestinians, but doing it through the wrong channels, making them “terrorists.”

Track 8, “Song for the Mavi Marmara,” gives some background on the history of refugees in Gaza, and the efforts of Turkish activists and others from the US, Canada, Ireland and many other countries to break the siege of Gaza in 2010 by attempting to sail humanitarian aid ships directly to Gaza, without Israeli interference. Instead of a successful aid shipment, the effort ended in an Israeli massacre.

Track 9, “They're Building A Wall,” is about the ongoing siege of the West Bank, where Israel began construction in 2004 of a massive wall snaking through that occupied territory, dividing Palestinian society from itself even further, making life for Palestinians in the West Bank immeasurably worse in myriad ways.

Track 11, “Khader Adnan, Bobby Sands” talks about the Israeli policy of indefinite detention without trial of Palestinians. A similar policy on the part of the British occupation authorities in Northern Ireland was a major element in what fueled the growth of the IRA in the early 1970's. Many Palestinian and Irish activists are acutely aware of these parallels, as was Khader Adnan, who refused food almost until death, when Israel agreed to release him. For 66 days he didn't eat – which is exactly how long Bobby Stands was on hunger strike, leading to his early death.

I wrote track 12, “Jenin,” after the IDF destroyed much of that city in 2002. I predicted the response, which wasn't hard. The response actually came while I was writing the song, sitting by a river in Canterbury, England, of all places. Then I walked into a cafe and heard the news. There was a study that found that 93% of suicide bombers are motivated by personal loss, rather than by religion or anything else.

Track 13, “Vanunu,” is about Moroccan-Israeli scientist Mordechai Vanunu, who exposed the secret Israeli nuclear weapons program in 1986 after fleeing the country. For all the hype about Weapons of Mass Destruction in Iraq, Iran, Syria and elsewhere, there is a country in the Middle East known to have a massive arsenal of the deadliest weapons in the history of the world. Those weapons are nuclear weapons, and that nation is Israel.

Tracks 14, 15 and 16 (“Palestine,” “I Wanna Go Home” and “The Key”) all explore the theme of refugees who want to return to their homes, which have been forcibly taken from them by Israel.

“Palestine” is about a survivor of the massacre of thousands of civilians in a refugee camp in Lebanon which was facilitated by the IDF. “I Wanna Go Home” is about the desire to return to the home from which you were exiled. “The Key” is about one of many old Palestinian women in the refugee diaspora who still has the key to the home she once lived in.

Track 17, “The Death of Rachel Corrie” is about the young woman from Olympia, Washington who was in Gaza, trying to protect the home of a Palestinian family from being demolished by the IDF when the soldier in the bulldozer ran her over as she sat in front of it, in a brightly-colored orange vest.

Track 18, “Song the Songbird Sings,” is about one of many children shot dead by Israeli snipers for the crime of catching songbirds too close to the wall in Gaza.

Track 19, “Children of Jerusalem,” was the first song I wrote on the subject, after the massacre carried out by the IDF outside the Al-Aqsa mosque in Jerusalem, when Ariel Sharon, legendary butcher of Shatila, on the anniversary of the Shatila massacre, paid a visit to the mosque. Writing this song began my musical exploration of the subject in September, 2000. It's gotten me many gigs canceled, and it's brought me closer to many wonderful people within the Palestinian diaspora and supporters of Palestinian self-determination around the world, for which I'm forever grateful.

Track 20, “In One World,” is a song based on a story I read in the early days of the Second Intifada, about how life was back in the 70's, when it was comparatively easy for a Palestinian refugee living in the West Bank to pay a visit to their ancestral home in Eretz Israel, or what the Palestinians call '48.

Many people ask why people like me have such a keen interest in the plight of the Palestinians in particular, as opposed to other peoples around the world who have suffered terribly at the hands of one or another oppressor. One crucial reason for the obsession is that it's all very personal. These are my relatives, many of them with the same Brooklyn accents I grew up with, survivors or descendents of survivors of the Nazi Holocaust, doing the awful things they're doing to the people in the land they invaded, called Palestine. The last track, “Return,” explores that feeling a bit.

Falasteen Habibti is a compilation recording, drawing on material from many different studio sessions and live concerts from 2001-2014. All the songs were remastered at Big Red Studio for the purposes of making this recording hang together sonically as an album.

“Occupation,” “Palestine,” “The Key,” “The Death of Rachel Corrie,” and “Return” were recorded in 2003 in Boston, Massachusetts with Sean Staples producing and playing various instruments, along with Dave Westner and others. From the CD, Return (2003).

“Israeli Geography 101” and “Holy Land Five” are from the CD, Meanwhile In Afghanistan (2012), recorded at Big Red Studio in Corbett, Oregon with Billy Oskay and I producing, featuring Nick Angelo on electric guitar and Asher Fulero on keyboards.

“Bubbling Up” is from All the News That's Fit to Sing (2014), a digital album available on Bandcamp (and via www.davidrovics.com). It's a very acoustic album, just solo guitar and vocals.

“What Do You Call It,” “Khader Adnan, Bobby Sands,” and “Vanunu” come from another Bandcamp-only album, Everything Can Change (2013), featuring Jun Bustamante and Alejandro Arenas of St. Petersburg, Florida on all sorts of instruments. (My parts were recorded at Big Red Studio.)

“Song for the Mavi Marmara” is from the CD, Big Red Sessions (2011), recorded at Big Red Studio.

The version of “They're Building A Wall” here is from the live CD, The Commons (2008), recorded at Club Passim in Cambridge, Massachusetts, with Eric Royer on banjo and Allie Rosenblatt on harmony vocals.

The version of “I Wanna Go Home” on this album come from the CD, For the Moment (2005). My guitar and vocals recorded at Sugar Hill in Houston, Texas. Extra instrumentation by Sean Staples and Dave Westner in Massachusetts.

“Christmas Eve in Bethlehem” is from the solo acoustic Bandcamp album, Spies Are Reading My Blog (2013), recorded at Big Red Studio.

“Jenin” and “In One World” are from the CD, Hang a Flag in the Window (2002). Acoustic album recorded at Melville Park Studio in Massachusetts.

“Song the Songbird Sings” is from the solo acoustic CD, Songs for Mahmud (2004), recorded at Sugar Hill.

“Children of Jerusalem” was recorded live at Caffe Lena in upstate New York in late September, 2001.